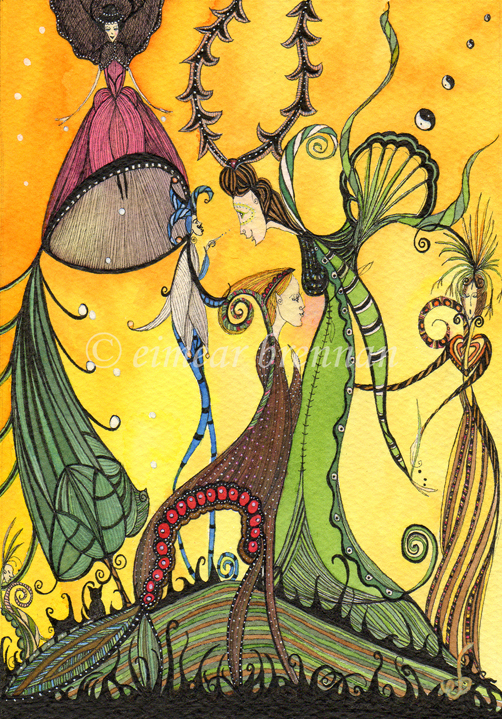 The Tuatha dé Danann were a mythical race of magical folk who once dominated Ireland. When the Milesians arrived in Ireland they defeated the Tuatha dé Danann and forced them to relocate to the Otherworld. They retreated into the mounds or hollow hills -the ancient earthenwork forts or raths where they became “na Daoine Sidhe”. The word sidhe means both “mound” and “faery”. Inside these forts were the palaces of the fairies. These served as assembly halls as well as the scenes of great feasts. At night-time music could be heard by passers-by coming from the raths. Sometimes the fairies were seen dancing on the top of old moats. Other-times they could be seen playing hurling in a nearby field on a moonlit night. Thousands of these raths still remain in Ireland today. They are visible portals to the magical underground world of Faerie. Human interference with these dwellings is not advised. There are countless stories throughout Ireland of people suffering illness, misfortune or even death having disturbed a fairy fort.

Sold Out
Add to Cart
If you would like to include a gift note with your order you can add a message in Note to Seller at the end of checkout.

​​This print is packaged in a compostable corn-starch bag (except for 35 x 25 cm size ).   It will be shipped flat between two pieces of strong cardboard and wrapped in brown paper.

This painting was inspired by Erin Morgenstern's " The Night Circus" Ireland's fairy forts.​